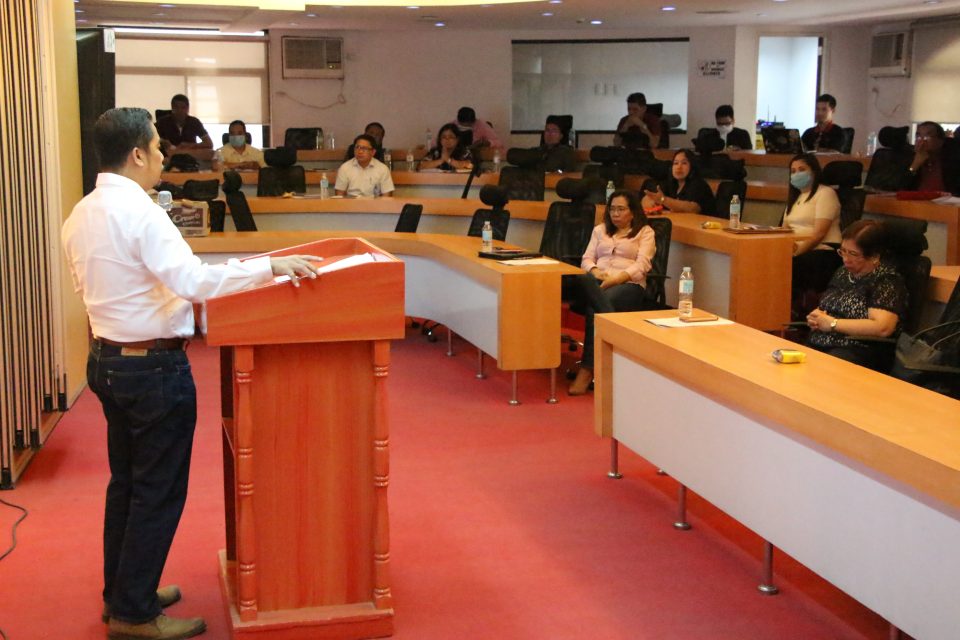 Batangas State University officials headed by University President Dr. Tirso A. Ronquillo, Executive Committee, all concerned Office Directors and College Deans mustered for an emergency meeting, thrashing out on the University’s plan of action for the prevention, control and mitigation of the spread of Corona Virus Disease 2019 (COVID-19), at the Lecture Room, International Affairs Office, 2nd floor, CITE Building, Batangas State University PB Main I Campus on March 13, 2020 10:00 AM.

With the heightened alert amid the growing cases of COVID-19 in the country, being under a State of Public Health Emergency as declared by President Rodrigo R. Duterte last March 8, BatStateU aims to ensure that all students, employees, internal and external stakeholders are in sound and stable situation, for the safety of the Red Spartan community. Vice Presidents and Executive Directors were instructed to conduct the cascading of these guidelines to the offices and units under their direct supervision through channel, assuring that the measures indicated will be strictly employed.

Minutes before the meeting, a memorandum was released by the Public Information Office of the Provincial Government of Batangas, mentioning one (1) confirmed case recorded in Batangas City. Also, as a part of the precautionary measures being planned out by the Provincial Capitol, classes in all levels are suspended in the whole province of Batangas until the end of the month, March 31, 2020.

Health Services and Infirmary Director, Dr. Leila Manalo presented the general guidelines, and was given authority to strictly enforce and monitor the implementation of the guidelines to ensure effective management in addressing the threat of COVID-19. Putting alcohol dispensers and thermal scanners will be put and implemented in all the strategic areas (entrances) inside the university. Periodic cleaning and disinfection of offices and classrooms will also be done at least once a week. Mass gatherings are also strictly prohibited as ordered by the DOH. BatStateU announced the postponement of some of its programs and events such as the commencement exercises and the celebration of the 19th Charter Week Anniversary on a Facebook post last March 11, 2020 as soon as the State of Public Health Emergency was declared. The General Preventive Measures infobits was also posted in an album to reach wider audiences of what and what not to do during this circumstance. All the above mentioned are some of the mitigations being done by the University to maintain a COVID-free campus premises.

These guidelines serve as a measure of extent and risk, to be assessed by the individual based from its exposure and detection of symptoms. The table below shows the summary of the signs and symptoms, history of travel, history of exposure, its category and action plan to be done, for everyone to be guided accordingly.

On March 14, a quarantine advisory was posted by the Batangas Public Information Office, subsequently after the release of the memorandum, the day before. Under the Executive Order No. 2HIM2-10, suspension of classes in all levels are extended until April 14, 2020, both public and private in Batangas Province. Mass gatherings are prohibited and social distancing are encouraged to be observed at all times. Land and sea travel will still be operational as long as passengers can present IDs, proving that they are residents or workers in the Batangas Province. The Executive Order took effect last March 15, 2020, 12:01 AM, and is subject to daily monitoring and re-assessment.

As of this writing, there are four (4) confirmed and reported cases in Batangas province, two of which are from Batangas City but are being treated at the Asian Hospital and Medical Center in Alabang, Muntinlupa, the other one is a resident of Lemery, Batangas, which was isolated at the Mary Mediatrix Medical Center in Lipa, City but was later transferred to a DOH hospital for further consultation, and the most recent one is a male resident from Lipa City confined in a hospital outside Batangas Province. There are 43 persons under investigation (PUI), 114 persons under monitoring (on-going) (PUM) and 175 persons under monitoring (cleared) in the whole province of Batangas.

The Philippines has now 140 confirmed cases, with death toll at 12. Continuous monitoring is being done by the DOH and other hospitals to contain the persons under investigation and monitoring and those patients diagnosed as positive with the virus.

Everyone is encouraged to stay at home or practice social distancing whenever there is a need to go out. Conduct a self-quarantine, or submit yourself to the hospital for consultation, should there be any signs and symptoms being experienced. For more information, kindly visit authenticated sources of reliable information such as the Department of Health and World Health Organization website and social media accounts, Executive Orders issued by the City, Municipality and Provincial Government, announcements and public advisories of the official social media accounts of Batangas State University and the BatStateU Public Relations Office.

Batangas State University anchors its actions for the protection of the Red Spartan Community and is committed to champion safety and security at difficult times like this.