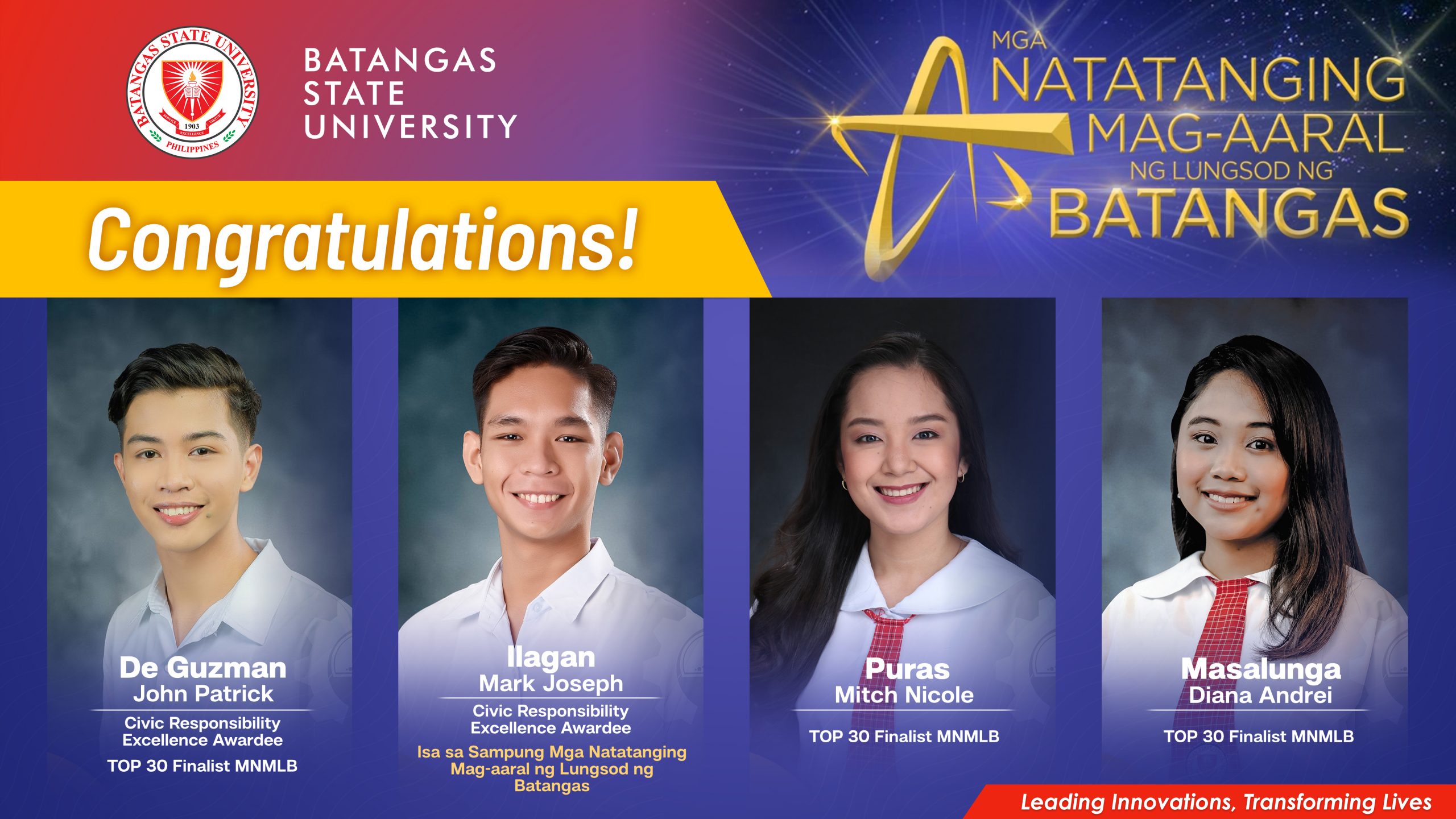 After a two-month, stringent screening process, the most outstanding students of Batangas City were recognized in virtual awarding ceremonies streamed live via Facebook, August 27, 2021.

Aside from being an Awards and Formation Program, the Mga Natatanging Mag-Aaral ng Lungsod ng Batangas (MNMLB) brands itself as a community dedicated to empowering young Batangueños in community and nation-building. It is organized by (Junior Chamber International) JCI Batangas Caballero, City Youth Development Council of Batangas, SK Federation – Batangas City, DepEd Division of Batangas City, and the Ten Outstanding Students of the Philippines – CALABARZON.

The four outstanding students from BatStateU are Mark Joseph G. Ilagan, Diana Andrei M. Masalunga, John Patrick G. De Guzman, and Mitch Nicole M. Puras. They are among the finalists of the MNMLB, which aims to inspire and mold young Batangueño students in taking part in community and nation-building. 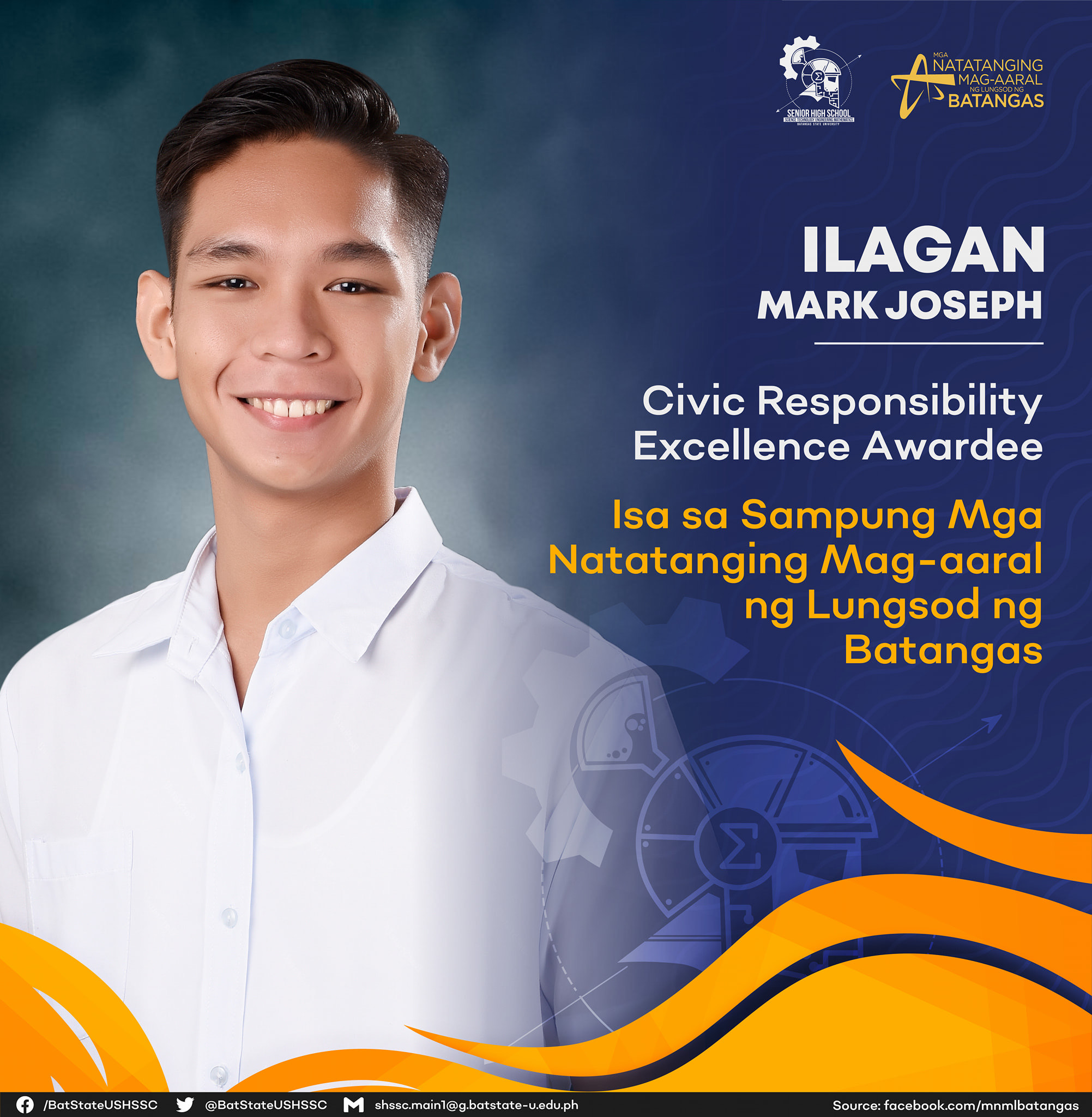 Ilagan was selected as one of the top Ten Outstanding Students of Batangas City. He said he felt fulfilled to be recognized as one of the top students in the city, which somehow served as a summary of many life-changing experiences he had throughout his high school life.

“Although it is my name that is linked to being one of the ten Mga Natatanging Mag-aaral ng Lungsod ng Batangas, I believe that I also share this recognition with the people and mentors I worked with from the beginning. Without their guidance, I think I would not be able to develop myself as an outstanding student,” he said in an interview. 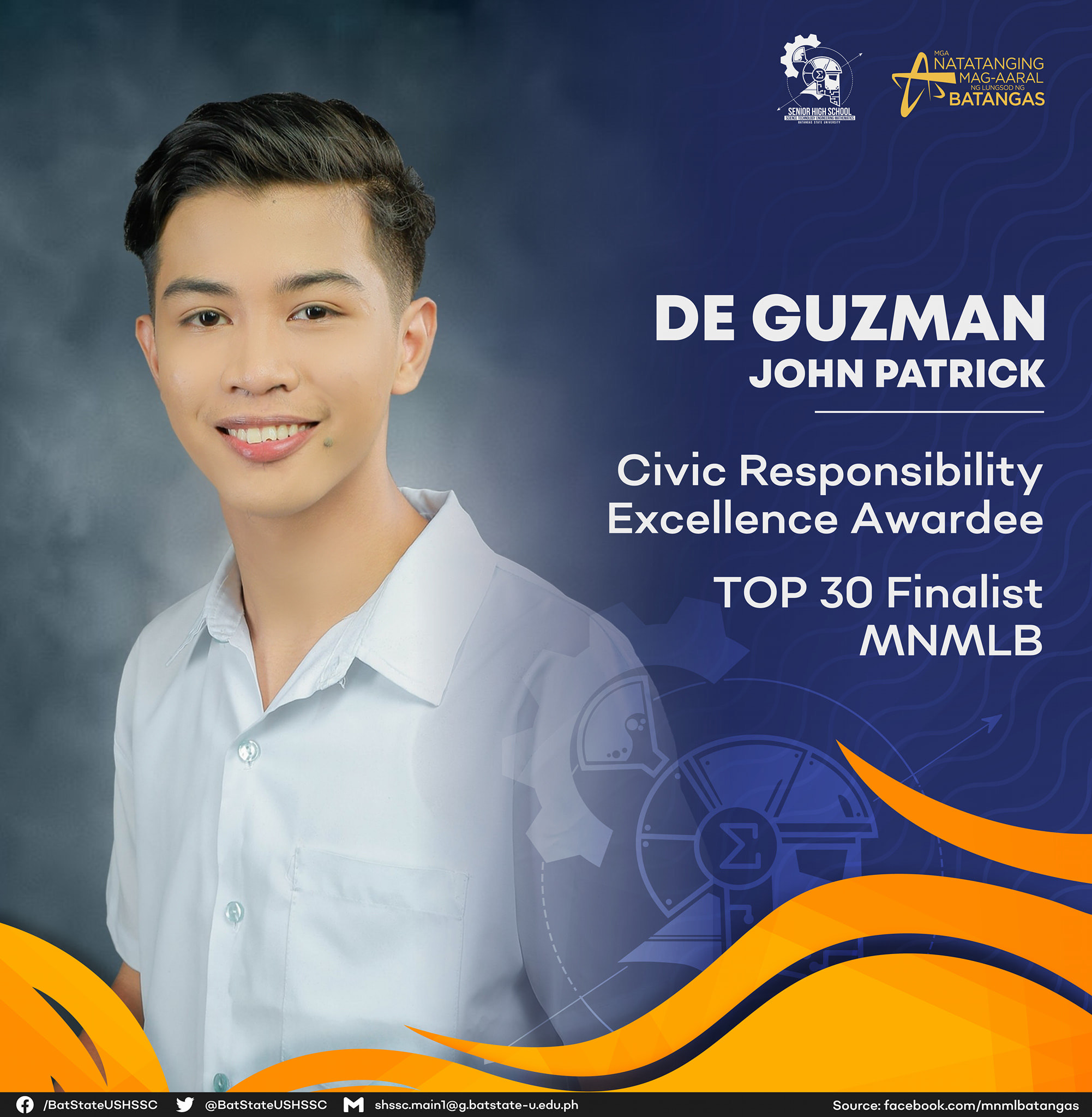 Furthermore, Ilagan, together with De Guzman, emerged as recipient of the Civic Responsibility Excellence Award, which acknowledges students who have established their leadership concerning the community and society by contributions through outreach programs and community extension projects.

Moreover, De Guzman expressed that he felt proud after being recognized for the Civic Responsibility Excellence Award.  “It felt very nice to know that my works for the youth were recognized and celebrated. It has also motivated me to do better and strengthen my commitment to service,” he stated in an interview.

Meanwhile, the IS-SHS student awardees also received the Youth Leadership Excellence Award, which is given to all finalists, crediting their leadership skills and service to the youth. 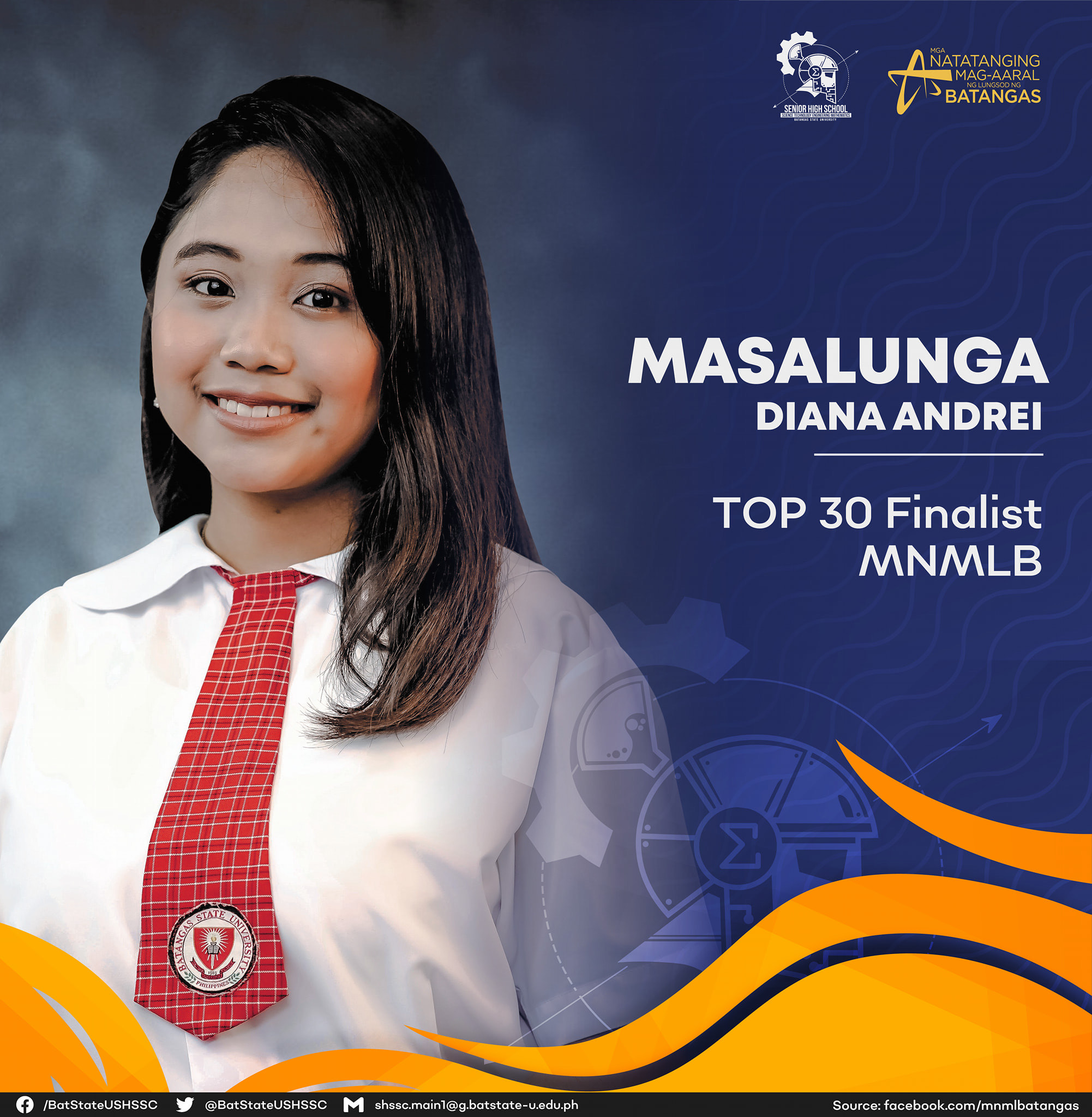 Diana Andrei M. Masalunga claimed that she is blessed and honored to represent BatStateU in striving for a huge award like MNMLB, having the opportunity to share the lessons and values she learned as a Batang IS with other students in Batangas. On the other hand, Mitch Nicole M. Puras, when asked about what she brought with her throughout her journey in MNMLB, stated that hardships will always be worthwhile. “Just keep in mind that success is a journey, not a destination, and we are currently on that journey,” she cited. 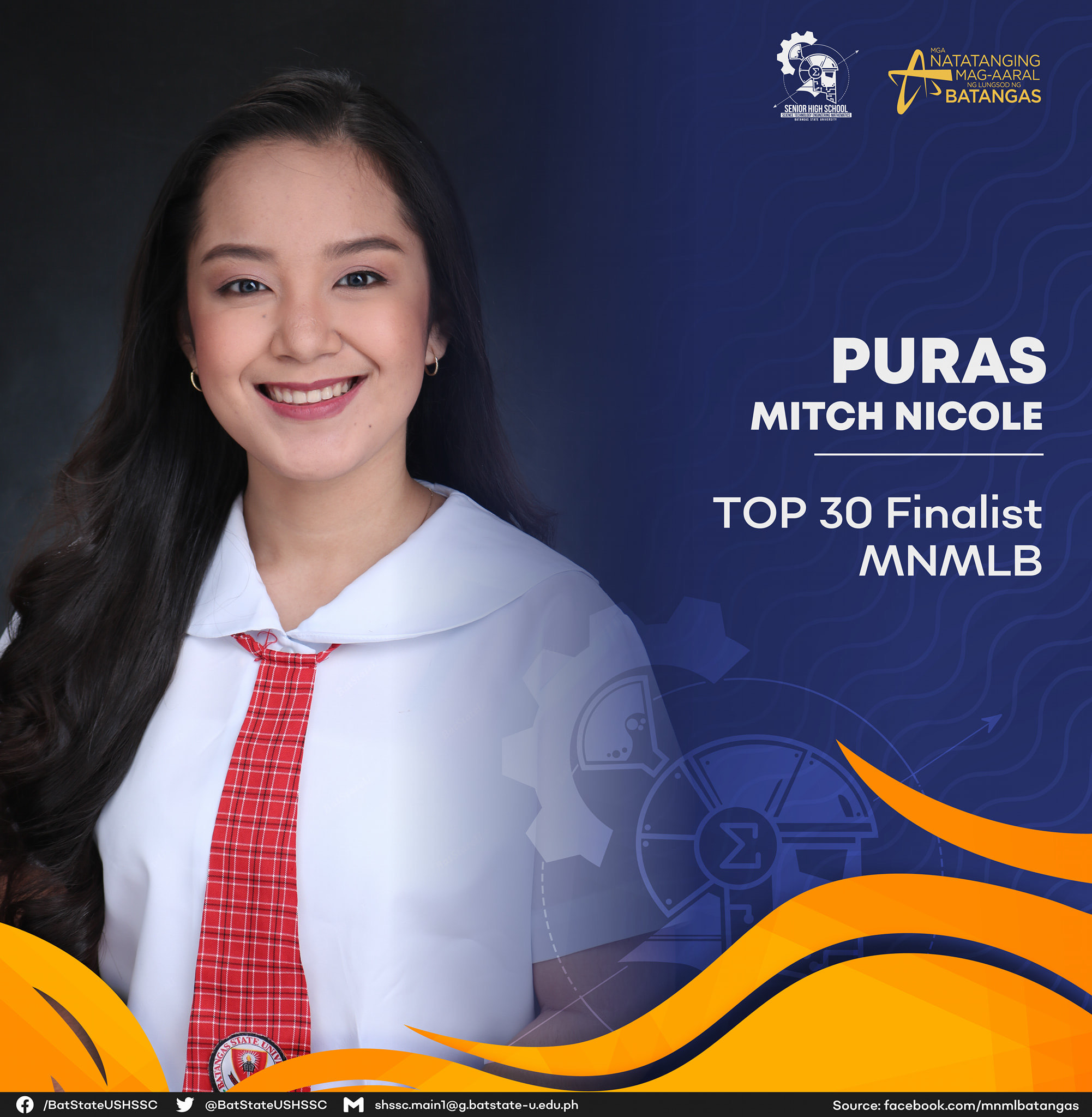 This is the first organized search for outstanding students of Batangas City, and the organizers plan to continue the program in the future.